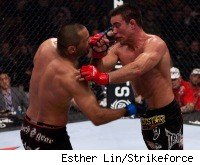 NASHVILLE, Tenn. -- He's won 14 straight fights, hasn't lost in four-and-a-half years, has owned belts in two weight classes in the last two years, and has yet to lose as a middleweight, but Jake Shields isn't ready to put his name into the category of the world's best middleweight.

For that, he goes to a man who recently undertook tremendous criticism for what seemed to be an unwillingness to finish his fight at UFC 112: the UFC champion Anderson Silva.

"I give it to Anderson," he said. "You've got to. He's on a tear. He's beaten everyone. To say he's not the best, someone's got to beat him first."

"He looked amazing the first few rounds," he said. "Yeah it wasn't the best fight ever, but the guy's got the skills. You might not have liked the fight, but he's still in my mind the best middleweight in the world until someone beats him."

Shields said he is starting to feel more comfortable at 185 after spending most of the last several years at 170. He said he's willing to fight at both weights to make challenging matchups, and cited Silva and B.J. Penn as two fighters he'd like to emulate in fighting in multiple weight classes.