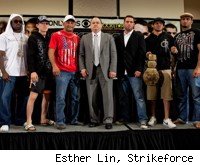 Round 1: Campbell tries for an early takedown, but Floyd counters with a guillotine attempt. Campbell continues looking for a takedown while Floyd punishes him with elbows for his effort. Campbell is relentless. Floyd hammers him with a knee and a right uppercut. Floyd wins a scramble and ends up on top, raining down blows, then moves to full mount. Floyd tries an arm bar but Campbell is saved by the bell. MMA Fighting scores the round for Floyd, 10-8.

Round 2: A foul early in the round necessitates a long timeout. The fight resumes after a few minutes. Floyd goes right back on the offensive. Floyd takes his back for a moment. Floyd is throwing the whole arsenal at him. Campbell is tough, but outclassed. Floyd lets him up and lets loose with punches and kicks. Campbell is nearly out on his feet as the round ends.

Round 3: Floyd continues the beating until Campbell crumples in a corner and the fight is called.

Round 1: Another early foul stops action early. Ortiz gets a takedown. Ortiz moves to full mount quickly. He moves to an arm triangle, then back to full mount, then to his back. Pennington's surviving, but not doing much else. Ortiz tries a rear naked choke. Pennington fights it for a while but eventually taps.

Round 1: Worsham takes Underwood down. They stand up, but Worsham crowds him and knees him from the clinch. Worsham controls him for the majority of the round, though Underwood landed a couple solid strikes and drew blood. MMA Fighting scores the round for Worsham, 10-9.

Round 2: Underwood takes over the second round with an early takedown. Working from the side, he peppers Worsham with strikes. Worsham comes back late, but MMA Fighting scores the round for Underwood 10-9.

Round 3: Underwood with another takedown, and now he is just bullying Worsham around. He's bigger and stronger and that's paying dividends. Worsham dives in for a takedown and Underwood stops it. He lands a couple punches and likely wins the round, 10-9.

Round 1: Yarbrough smothers Shockman against the fence. Out of a clinch, Yarbrough drills him with a knee to the face and Shockman goes down in a heap. He covers up as Yarbrough tries to finish. Shockman's cut from the onslaught, and Yarbrough moves to full mount. Shockman works back to half-guard, but Yarbrough keeps working to improve his position and gets to side mount. Ref Mario Yamasaki stops the action to have a doctor look at Shockman's cut, but the fight is allowed to continue. Yarbrough takes him down on the re-start and uses some ground-and-pound to end the round with a 10-9 advantage, according to MMA Fighting scoring.

Round 2: Yarbrough knocked Shockman down with a strike, then stood over him and pistoned lefts and rights before Yamasaki called the action.

Round 1: West, a Nashville kid, was the hometown favorite, but things did not go well for him. Uhrich took him down and choked him out in short order, via rear naked choke.

Round 1: St. Preux put Hawk down with an overhand right and went for the finish. Hawk held on for a while, but St. Preux was relentless. A series of thunderous lefts from the top made it a short night of work. It took all of 47 seconds.

For the play-by-play of Jason "Mayhem" Miller vs. Tim Stout, click here.