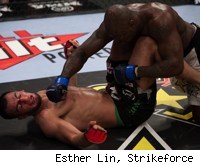 It was a great showing by Lawal, who in Mousasi was fighting by far the toughest opponent of his mixed martial arts career. Lawal showed throughout the fight that his amateur wrestling background and his physical strength were just too much for Mousasi to handle. Lawal is now a champion, and one of the best light heavyweights in all of MMA.
Mousasi got things started with a head kick in the first round, and Lawal responded by hitting Mousasi with an overhand right. Lawal, who was a very good college wrestler, wanted to take Mousasi down, and he succeeded in doing so about a minute into the first round. Mo kept Mousasi flat on his back for most of the rest of the first round and hurt him with ground and pound, although Mousasi stayed relaxed throughout, threw some upkicks at Lawal, and ended up getting back to his feet with a minute to go in the round. It was a good first round of action and a round that would have to go to Lawal, 10-9.

At the start of the second Lawal took Mousasi down again and got on top of him again, but this time Mousasi started punching Lawal from his back, appearing to frustrate Lawal. For the first half of the second round Lawal was on top of Mousasi and was losing the round because Mousasi stayed so busy striking from his back. Later in the round they went back to their feet, and at the end of it Mousasi got on Lawal's back and was hurting him as the round ended. It was a brilliant round of tactical fighting from Mousasi.

Lawal was breathing heavily at the start of the third, but he wasn't ready to quit, giving as good as he got while trading strikes with Mousasi on his feet. Lawal then took Mousasi down a couple minutes into the third round, but whereas in the previous round Mousasi had been brilliant off his back, in the third Lawal got the better of the exchanges, landing punches from the top while Mousasi could do nothing other than try to protect himself. It was a great third round for Lawal.

At the start of the fourth it was Mousasi who looked worn out, as Lawal landed a couple of good punches and then took Mousasi down and put him on his back again. Lawal spent the next couple of minutes controlling Mousasi from the top, and after referee Big John McCarthy briefly stood the fighters up, Lawal took Mousasi down again and got into side control. It was a close, competitive round that I gave to Lawal.

By the time the bout reached the fifth round it was the longest fight of either man's career, and they both looked spent. Lawal landed yet another takedown 30 seconds into the ground and showed that Mousasi just doesn't have the takedown defense to deal with a great wrestler like Lawal. Mousasi landed an illegal kick to Lawal's head on the ground, leading McCarthy to take a point away and ensuring that Mousasi wouldn't win a decision. For the final couple of minutes Lawal continued to use his strength and wrestling to keep Mousasi down, and the fight ended with Mousasi flat on his back and Lawal on top.

All three judges scored the bout 49-45 for Lawal.

It will be interesting to see what kind of competition Strikeforce can give to Lawal, who improved his MMA record to 7-0. Most of the best light heavyweights in the sport are under contract to the UFC, but Lawal should be fighting world-class opponents. For Mousasi, who falls to 28-3-1, it's time for him to get stronger, work on his takedown defense, and perhaps get into a position to challenge Lawal to a rematch of what was a very good, but very one-sided, fight.