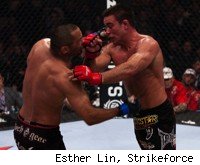 When Strikeforce signed Dan Henderson last year, it acquired a proven star of mixed martial arts who would, the promotion hoped, win a Strikeforce title belt and provide big ratings on CBS.

We'll have to wait for the ratings to come in before we know whether Henderson succeeded in selling the fight, but his championship ambitions hit a roadblock in the form of Jake Shields Saturday night at Strikeforce Nashville.

Shields survived an early storm from Henderson on the feet in the first round and then proceeded to dominate the second through fifth rounds on the ground, absolutely destroying Henderson and easily winning a unanimous decision. Stunningly, what should have been a coronation of Shields after the fight turned into a post-fight brawl, as Shields' last opponent, Jason Miller, ran into the cage and demanded a rematch, spurring a fight.


"I really apologize for that," Shields said after the brawl subsided. "That's out of my character."

As for the fight between Shields and Henderson, Henderson leveled Shields with a big right hand just 20 seconds into the first round, appearing to have Shields in big trouble and almost knocked out. It was reminiscent of Henderson's big right hand the last time he stepped into the cage, when he knocked out Michael Bisping at UFC 100.

Shields recovered nicely and actually locked up Henderson's leg on the ground, forcing Henderson to grab the fence to steady himself. But it wasn't long before Henderson was landing more punches and knocking Shields down again. Shields looked hurt and perhaps even a little scared as Henderson, the bigger, more powerful, more experienced fighter, was having his way with him on his feet. Shields managed to survive the first round, but it was a first round that Henderson dominated.

At the start of the second round Shields got the fight to the ground, which was where he wanted it. Although Henderson at first looked comfortable and got Shields' back, Shields eventually worked his way into mount and began raining punches down on Henderson. With about a minute left in the first Shields was dominating so thoroughly that it looked like he might be ready to finish Henderson, although Henderson did manage to survive the round.

In the third they spent most of their time on the ground again, and Shields again showed that he was able to control the fight there. Although he didn't land as many punches on the ground, Shields did mount Henderson and punch him in the head repeatedly late in the round, once again winning the round.

Henderson came out in the fourth round swinging for the fences, throwing a hard right hand and a kick, but Shields once again got the fight to the ground and once again established the dominant position. Shields was cautious from the top position and some fans started booing, but it was a methodical display of jiu jitsu in which Shields completely controlled Henderson.

Less than a minute into the fifth round Shields took Henderson down once again and went from side control to mount, and from there it was time to ride out the victory: Shields thoroughly dominated the rest of the way, and retained his Strikeforce middleweight title.

Shields noted afterward that his own promoters "weren't giving me respect." Everyone has to respect him now.

Henderson, the former Pride champion at both 185 and 205 pounds, came into the fight with a record of 25-7 and was considered by most observers to be one of the sport's elite fighters. But Shields, the former EliteXC champion at 170 pounds, improved his record to 25-4-1 and simply dominated Henderson. It's time to say something that hasn't been said much before: Jake Shields is one of the best fighters in the world.