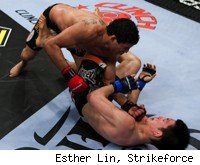 The battle of Dream and Strikeforce lightweight champions went to Strikeforce, as Gilbert Melendez defeated Shinya Aoki by unanimous decision at Strikeforce Nashville.

It wasn't a great fight, but it was a great performance by Melendez, who now deserves to be called one of the best lightweights in MMA, and the best lightweight outside the UFC. The two spent the first couple of minutes feeling each other out on their feet before Aoki accidentally poked Melendez in the eye, causing a brief delay. After that Aoki took the fight to the ground, got on his back and clamped onto Melendez's arm, but Melendez managed to break free and get back to his feet. It was a close, even round after that, with Melendez perhaps winning the round by landing more heavy strikes.

Early in the second round Aoki's nose was badly bloodied from Melendez's punches, and although Aoki got Melendez to the ground, he never put him in danger of being lured into one of Aoki's great submissions. As the second round wore on and both fighters were cautious on their feet, the crowd began to boo. It was a round that didn't have much action, but that went to Melendez for more effective punching.

In the third round Melendez began to look more and more comfortable dealing with Aoki on his back, aided in part by referee Mario Yamasaki standing the fighters up quickly. By the end of the third Melendez had badly battered Aoki and had taken complete control of the fight.

The fourth round featured plenty of booing from the fans, who weren't pleased with the way Aoki would flop onto his backside and charge forward in an attempt to catch Melendez in a leg lock. At one point Yamasaki stepped in and told Aoki to stand up just as Melendez was coming forward to punch Aoki, leading Melendez to land a punch that Yamasaki warned him was illegal. The fourth round wasn't much of a crowd-pleaser, but it was another effective round for Melendez.

In the fifth round Aoki got Melendez right where he wanted him, on the ground in rubber guard, but Melendez did a nice job of trapping Aoki against the cage and controlling him. In the final minute of the fight Melendez really went to work, landing a number of powerful punches and battering Aoki on the ground as the final bell rang.

Melendez won the fight 50-45 on all three judges' cards.

Although Frankie Edgar and B.J. Penn of the UFC are widely regarded as the best lightweights in the world, Melendez shrugged after the fight when asked whether he believes he's the best in the world. Said Melendez, "I think I'm top three."