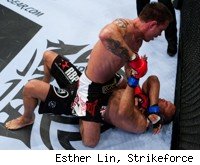 NASHVILLE, Tenn. -- This is the Strikeforce live blog for Jake Shields vs. Dan Henderson, a middleweight bout on tonight's Strikeforce: Nashville card on CBS.

Shields makes his middleweight title defense against the highly-decorated Henderson. Shields is coming off a win over Jason "Mayhem" Miller at the last Strikeforce-CBS card in November. Henderson will be making his Strikeforce debut.

The live blog is below.
Round 1: Big "Hendo" chant early. Henderson smashes him and Shields goes down as the crowd explodes. Shields goes for a heel hook, but Henderson escapes. Henderson wobbles him again with a right. Henderson is savaging him early. Shields tries to pull guard. Henderson is mauling him. Shields to his credit recovers. They clinch against the cage, but the break soon follows. Shields takes him down but Henderson immediately escapes. The crowd is so happy to see action they're cheering for knees to the legs. Rough start for Shields, but he survives the round. Still, Henderson gets the round, as MMA Fighting scores it for Hendo 10-8.

Round 2: Shields dives in for an early takedown. Henderson briefly reverses and takes his back. Shields immediately escapes and gets top position. Shields goes to full mount. A couple hard strikes from Shields as he takes the momentum. Shields is hammering him from the top now. Hendo looks in trouble. Big John McCarthy is looking right into Henderson's eyes, and though he's eating punishment, McCarthy allows it to continue. Huge round for Shields. MMA Fighting scores it for Shields 10-8.

Round 3: Shields looks much more comfortable now. He goes in for the takedown again. Henderson is able to get free. Shields follows up with another takedown. Shields has to be feeling good about what he's doing. He moves to side control. Shields works to full mount with the guillotine. He gives up the guillotine but has full mount again. Forty sefconds left for him to work. Shields goes for an arm bar with about 15 seconds left, but doesn't have enough time to finish. Still, MMA Fighting scores it for Shields, 10-9.

Round 4: Shields keeps ducking under the right and goes for the single leg. He takes Hendo down again. It is surprising how easily he's taken Hendo down and moved to mount. He does it again here, albeit briefly. The crowd is so pro-Henderson that they aren't appreciative of what Shields is doing here, but he's really taking the fight over. He mounts Henderson again with 1:30 left. Another round in the books for Shields, 10-9 by MMA Fighting scoring.

Round 5: Hendo is tired. Shields timed the right again. Hendo fought for his life to stay upright, but Shields slammed him down once again. Shields wants the finish, but Hendo seems too tough right now, and Shields' strikes lack the steam to stop him. Shields tries the arm triangle choke, but can't finish. Shields tried a kneebar at the end, but time runs out. MMA Fighting scores the round for Shields, 10-9.