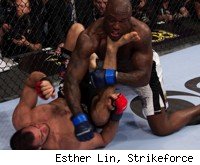 The live blog is below.
Big John McCarthy is the referee.

Round 1: Lawal comes out southpaw. Mousasi tries a headkick early. Lawal ducks it. Very low center of gravity for Lawal, who completes his first takedown try. Mousasi tries a triangle, Mo pulls out. Mousasi has full guard. Lawal misses a big right, but lands in side control. Lawal pulls out, then dives back in with a right hand that grazes the champion. Lawal is really active with strikes, and he's right in his own corner, adding to his comfort factor. Mousasi gets up, hits him a couple times, and Lawal takes him back down. MMA Fighting scores the round for Lawal, 10-9.

Round 2: Lawal fakes a takedown, but follows it right up with a successful one. Mousasi lands punches from the bottom. Mousasi is getting the better of the fight despite the positioning. Very active from the bottom, and he gets back up midway through the round. Mousasi lands a straight right as Lawal completes another takedown. Mousasi gets up again with a minute left, but only stays up for a few seconds. Mousasi threatens with a triangle, but Mo escapes. Mousasi takes Lawal's back and tries a rear naked choke as the round ends. MMA Fighting scores it for Mousasi, 10-9.

Round 3: Mousasi looks the fresher of the two as the early round starts with standup. Mousasi lands a right hook, Lawal answers with a right of his own. Lawal finds a surge and hammers Mousasi with strikes, then takes him down. The crowd is mostly for Mousasi, but it's pretty close, and there's a nice cheer at the takedown. Lawal scores with strikes from the side, trying to wear Mousasi down. Lawal continues to grind away and comes back to take the round, 10-9.

Round 4: On the the championship rounds. Lawal scores a takedown. Mousasi can't stay upright, and Mo is just wearing him down. After a lengthy time on the ground, they're returned to their feet. When Lawal gets determined to take his man down, it's pretty much a sure thing. He's moving towards capturing another round, though Mousasi stifles any heavy artillery. It's enough for Lawal to add ground and pound, and MMA Fighting scores the round for Lawal, 10-9.

Round 5: Lawal drives through for a hard takedown against the cage. Lawal is really playing this one smart with his strategy. He talks a lot, so people underestimate his intelligence, but he's a very bright guy, and he refuses to let Mousasi work in comfortable positions. Mousasi hit Lawal with a kick while he was a grounded fighter, and McCarthy deducts a point. Lawal restarts in the same position and holds on. Mousasi gets up to his feet. Around 80 seconds left. Lawal gets another takedown, and that might be game over. MMA Fighting scores the round 10-8 for your new champ, King Mo.