Gegard Mousasi on King Mo: 'A Wrestler Will Always Be A Wrestler' 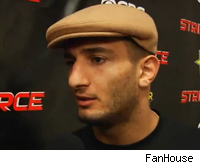 NASHVILLE, Tenn. -- Strikeforce light-heavyweight champion Gegard Mousasi has heard all of what Muhammed "King Mo" Lawal has had to say. And from his "Kermit the Frog" Mousasi impersonation to his contention that Mousasi hasn't progressed as a fighter in the last couple years, Lawal has had plenty to offer.

But the Strikeforce light-heavyweight champion has brushed all that aside, cognizant of the fact that when the two are locked inside the cage at Saturday's Strikeforce: Nashville event, the fight's outcome will be his definitive statement.

Mousasi, though, did have something to say about Lawal's declaration that he'll be bringing a chaotic new approach to this fight, a discipline he dubbed "Cuban style."

"A wrestler will always be a wrestler, and they will always go back to the basics," Mousasi told MMA Fighting. "I just focus on what I'm going to do. I can say, 'I'm going to fight the Chinese style.' I'm just focused on my game plan and what to do to win the fight. A fight is a fight. You can have any style. But I've seen his style. You cannot change certain styles in how you fight. He'll be the same fighter he's been in the last couple fights."

And Mousasi (28-2-1) believes that Lawal will fall back to his wrestling.

"I know that maybe I'm going to end up once or twice on my back," he said. "People think the fight ends once he takes you down. OK, he's a good wrestler but it doesn't mean the fight ends there. It's five rounds, and I'll get my shot at him."

Mousasi says he only really studied two of Lawal's fights: his recent knockout win over Mike Whitehead, and a March 2009 decision victory over Ryo Kawamura.

But even given a short track record for Lawal -- the Saturday fight will only be his seventh pro bout -- Mousasi feels that Lawal is deserving of the chance to fight for the Strikeforce light-heavyweight belt.

"People can't always judge by the records," he said. "Maybe a guy has 11 wins in MMA but he's fought the best. Someone else has 11 wins but he's fought nobody. It's a difficult sport because someone can be a champion in four fights, look at Brock Lesnar. So records don't always mean a lot. I'm not looking at his record now."

Mousasi and Lawal have personalities that are at opposite ends of the spectrum. Mousasi is quiet and unassuming while Lawal is loquacious and ebullient. The dichotomy was clearly evident during weigh-ins. Lawal walked in with two ring girls escorting him, one throwing rose petals at his feet and the other holding a Burberry umbrella over the showman's head. Mousasi, meanwhile, walked in with his corner man and barely acknowledged the crowd attending the weigh-ins outside the Bridgestone Arena. As the two stood face-to-face for a photo opportunity, Lawal began barking at him until Mousasi rolled his eyes and turned away.

Mousasi's poker face makes it impossible to know if anything Lawal's done has gotten under his skin, though he insists it doesn't matter. To him, he's just showing up to another day of work, against another man that he feels he knows well.

"It's just going to be another fight for me," he said. "I never have any problems as long as I know my opponent one month before. That's enough time. Getting in the cage, it's not like I need a whole mental preparation for it. It's just a fight."