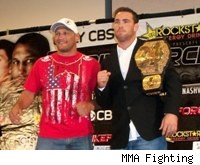 NASHVILLE, Tenn. – Last July, Dan Henderson was on the last fight of his UFC contract when he scored a highlight reel knockout of Michael Bisping, giving him maximum negotiating power in his free agency. He eventually parlayed the situation into a four-fight deal with Strikeforce.

The first fight on that deal comes in Saturday's middleweight title match against Jake Shields, who would like very much to follow the same blueprint Henderson designed. Shields is now in the same situation, with his title defense wrapping up his current deal, and free agency looming.

Adding to the intrigue, UFC President Dana White has already stated an interest in Shields, particularly if he can find a way to beat the former two-time PRIDE champ. So those are the stakes for Shields as he walks into the Strikeforce: Nashville main event spotlight before a national television audience.

Shields (24-4-1) is the winner of 13 straight bouts, and though he once had the reputation as a "lay and pray" fighter – even Henderson said he was worried Shields would try to "hump out" a win – he has shown a propensity to close out matches over the last few years, finishing eight of his last nine bouts.

It's no secret that Shields' best weapon is his jiu-jitsu. Six of his last eight wins have come via tapout, including his Strikeforce middleweight title win over Jason "Mayhem" Miller in Nov. of last year, a fight that marked the first time he didn't finish a fight in three-and-a-half years.

To truly threaten Henderson then, Shields has to get the fight to the ground. According to Compustrike, Shields has successfully completed 15 of his last 23 takedown attempts (65 percent). Henderson, a former Olympic Greco-Roman wrestler, will not be an easy target, though Compustrike shows he's been taken down four times in eight tries over his last five fights.

Most are in agreement that Henderson has the better – or at least more powerful – striking game, so the question becomes, Can Shields take him down?

Henderson himself recently admitted to MMA Fighting that he expects to be on his back at some point, just that he wouldn't be there long.

Henderson, though, presents a much more difficult challenge in being dragged down to the mat than any of Shields' recent opponents due to his wrestling pedigree combined with his expectation of Shields' game plan. In the past, Henderson has been taken down using the element of surprise as part of the strategy. Shields though has made it no secret – he's even gone so far as to say he knows it will be a long day for him if he can't take Henderson down -- so he's going to have to mix it up, trading with Henderson before transitioning into takedowns. He's good enough to do it, but it's also going to be risky.

Henderson has thunderous power in his hands, though when he gets confident with his range, he often goes for knockout shots instead of setting things up. Ducking under a big right could be just the opening Shields needs to change levels and put Henderson down.

Shields is an underdog here, and he has a lot to gain with a victory. His current winning streak is no accident, and I think he is more than capable of dragging Henderson into an ugly fight that will benefit him. Henderson historically does not throw many knees or kicks, weapons that are more likely to stop Shields from boring in for takedowns. If he can not dissuade Shields from continually looking for the shot, things could get dicey. Remember, Shields isn't necessarily scared by big hitters. He took down sluggers Paul Daley and Robbie Lawler and imposed his game plan against them. Henderson is of course higher up the ladder than either of those two, but the point is still valid.

Another aspect of the fight that has not been mentioned much is Henderson's layoff. It's been nine months between fights for the 39-year-old, and statistics show that most fighters who endure lengthy absences lose. And he's not only back after a long layoff, but he's back in a potential five-round fight.

This fight will be more competitive than many people think. Henderson has the standup advantage, and Shields is the ground wizard, but the fight will be won or lost in the middle ground of wrestling and clinch work. Can Hendo stay upright, or will Shields' relentless takedowns wear him down? It's a 50-50 proposition, really. I certainly believe Henderson will stop a few takedowns, but Shields will stay tenacious and find a way to put him on his back at least a few times. In the late rounds, I think it's possible a tired Henderson makes a mistake and Shields capitalizes. Final call: Shields via fourth-round submission.