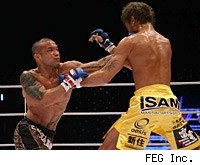 NASHVILLE, Tenn. -- Strikeforce MMA has officially hit the Music City, and MMA Fighting has talked to several sources about upcoming fights and events involving the organization. Below is our Strikeforce news notebook:

* Japanese star Kid Yamamoto is expected to make his Strikeforce debut on May 15 against Federico Lopez. The fight is not officially signed, but sources say it is close. The fight would be contested at 135 pounds. As of right now, the fight isn't expected to air on Showtime.

* A middleweight fight between Ronaldo "Jacare" Souza and Joey Villasenor is in the works for May 15, as well.

* Speaking of May 15, the only two Showtime fights that are official are Andrei Arlovski vs. Antonio Silva and Alistair Overeem vs. Brett Rogers. The organization is still targeting Antwain Britt vs. Rafael "Feijao" Cavalcante and Vitor "Shaolin" Ribeiro vs. Lyle Beerbohm or Mitsuhiro Ishida. Roger Gracie vs. Kevin Randleman is still also a possibility. More fights for that card should be announced following Saturday night's event.

* The organization officially announced a June 16 show in Los Angeles. No fights have been announced just yet, but they are hoping to put together Jason "Mayhem" Miller vs. Robbie Lawler and have Bobby Lashley fight on the card.

* The organization is looking to hold an event on June 26 at San Jose's HP Pavilion. No fights have been announced, but Cristiane "Cyborg" Santos is being targeted and Fabricio Werdum vs. Fedor Emelianenko, as well. If the issues between M-1 and Strikeforce aren't resolved in time, Werdum will fight against another opponent.

* The only Strikeforce event currently scheduled for July is a Challengers show. No date or venue has been finalized.

* The organization is expected to put on another major Showtime card in August.

And finally, some news on the new EA Sports MMA video game:

* The game is slated for a fourth quarter 2010 release.

* There will be no women fighters featured in the game.

* Other organizations will be featured, but they have yet to officially announce them.

* Approximately 60 fighters will be featured in the game.

* As of right now, EA Sports is still planning on rotating between their MMA and boxing game every year.