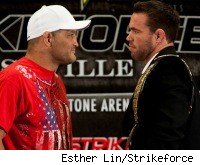 NASHVILLE, Tenn. -- Three championships will be on the line at Saturday's Strikeforce: Nashville event, but first, the six fighters involved have to go through the business of making weight.

MMA Fighting is on scene to bring you the details, and the results begin below.

All six of the main event fighters comfortably making weight, with only Henderson checking in at the limit allowed under championship rules.

Henderson looked confident, smiling during the proceedings while Shields appeared focused, never cracking a smile and continuing the staredown with Henderson long after Henderson looked away from him and towards the crowd.

Melendez and Aoki respectfully shook hands, with the Japanese fighter refusing to make eye contact at all, while Lawal made the most colorful entrance, bringing two of his own ring girls with him, one of which threw rose petals at his feet while the other held a Burberry umbrella over his head.

When he and Mousasi squared off, Lawal spoke to him, but Mousasi laughed and rolled his eyes before turning away.

The only fighter who missed weight was welterweight Andy Uhrich, who was a half-pound over the limit for his welterweight undercard fight with Dustin West. Uhrich dropped his shorts hoping that would be enough, but checked in at 171.5 for both of his attempts. He will have two hours to drop the excess weight.