Jake Shields Training for Biggest Fight of His Career 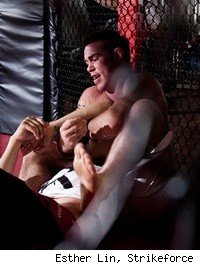 Jake Shields is already considered by some as one of the world's best for his wins over the likes of Jason "Mayhem" Miller, Carlos Condit, Yushin Okami and Robbie Lawler, but he'll have to opportunity to cement himself near the top if he beats Dan Henderson at Strikeforce: Nashville on April 17.

In an exclusive interview with MMAFighting.com, Shields talks about his experience on The Ultimate Fighter 11, getting ready for Henderson and his philosophy on fighting friends/enemies inside the cage.

Ray Hui: Dan Henderson will certainly be the biggest fight of your career. Do you also see him as the biggest test of your career?
Jake Shields: Yeah, I've fought a lot of good opponents and Dan Henderson's probably the best. He's got a good record and everyone that Dan's fought is in the top, top. He's held two PRIDE belts. The guy is definitely a test, and I'm definitely excited for this fight.
This will be officially your third fight in the middleweight range. Most rankings have you somewhere in the top 10. How far do you think you'll move up with a win over Henderson?
I don't really think about that too much. Obviously, it'd be nice to be ranked No. 1 at some point, but I'm not too concerned with rankings. Henderson, a lot of people have him at like two or three right there, so if I beat him at 185, it definitely puts me at a high spot.

From the workout photos, you seem to have grown into a middleweight. Do you feel right now that your body makes you a full-fledged middleweight or do you still feel like you're still a welterweight moving up to 185?
Yeah, I feel like I'm where I want to be right now. I do plan on dropping back down at some point I don't want to get much bigger. I don't want the drop to be impossible, so. I definitely bulked up quite a bit. I've got a great strength trainer. I've been taking TapouT Sports Nutrition. The guy designed me a great nutrition program.

What's the first thing you do in your camp to get ready for Henderson?
I start watching tapes and putting together a gameplan. I've watched a few tapes and obviously he has a big right hand, trying to (avoid) that is key. And obviously at some point I want to take him down, so I'm going to put through a strategy to try to figure out how to make that happen now.

You're taking advantage of the resources at nearby AKA by training with their elite wrestlers. Yourself coming from an extensive grapplling background, are you learning new wrestling tricks with them or is training with them simply to drill against high level sparring partners?
Oh definitely it's both. It's tough competition, but I'm learning a lot of new tricks. I've been wrestling with (Josh) Koscheck, two-time wrestling champion. We're competitive. He's showed me a couple of good tricks recently and Daniel Cormier, he's a phenomenal coach. He's been helping me and teaching me new stuff. A high level guy like that, you can't go wrong.

You also got to train and help on The Ultimate Fighter 11. What was that like?
It was a really cool experience. It's a show that I watched and to be a part of it is really cool. To see how it's filmed. It's not something that's scripted. It's real and I don't know how they edited it, but it's a lot of good fighters and good fights. This season is definitely at least worth watching.

Are you expecting a little bit of face time?
Probably not. I don't expect to receive much exposure from it. I'll probably be a little bit in it. I don't think they would completely edit me out but I certainly won't be featured, me being a Strikeforce fighter. It wouldn't make sense for Dana to feature me.
An important thing for you is to always fight the top guys. If you beat Henderson, yeah, there's a lot of up-and-coming middleweights, but is there an established middleweight for you to fight in Strikeforce?
I think there's guys getting built up like Jacare. There's always new guys coming in and you never know who Strikeforce is going to sign. There's lots of top talent out there. And of course I'd like to fight guys like Anderson Silva and GSP as well.

Is this the last fight on your contract?
I believe so. My manager handles all that. I don't know exactly how it goes. I'm just concentrating on Henderson right now. Henderson is the biggest fight of my life. I'm not thinking past this. Strikeforce has been treating me really good, so I'm just going to get through this fight and work things out from there.
There was a photo of you recently where you were doing shots with Henderson. Henderson will be different for you from Mayhem in that Mayhem was talking trash going into the fight and it seems Henderson and you are friends in some capacity. When you're fighting against someone you like or dislike, does that affect the way you fight in the cage?
Not really. When you're in the cage, I'm not thinking about that. I beat the hell out of (training partners) Nick and Nate Diaz all the time, Gilbert Melendez -- we're good friends. I have a lot of respect for the guy, but I'm going to be out there trying to hurt him and he's going to try to hurt me. It's how it goes. It's all business.

What about when say, you're ground and pounding a helpless opponent. Do you look over to the ref to signal the finish, or do you keep punching until it's stopped?
I think you got to just pour it on. You got to look out for yourself. Obviously I wouldn't be happy if I actually hurt Henderson, but at the time being, if I'm punching him in the face or cranking his arm, I'm not going to stop. I'm willing to snap his arm in half, I'm willing to keep punching him until he's unconscious. It is what it is. He's going to do what he needs to do to me and you got to look out for your safety and go out there and win the fight. At the end of the day, I don't want to hurt him, but if I do, I'm not going to lose any sleep over it.