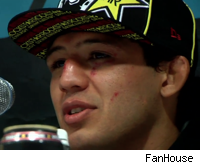 Sure, the earthquake analogy doesn't work so smoothly with his "El Nino" nickname, but then again, we are talking chaos here. For most of the last two years, most people generally considered some order of B.J. Penn and Shinya Aoki as the top two lightweights in the world. With Penn's recent loss to Frankie Edgar, it's a brave new world. And Melendez hopes to continue the upheaval of the veterans by sinking Aoki in the rankings on Saturday's Strikeforce show.

"I've watched Aoki fight for years and I'm a fan of the guy," Melendez told MMA Fighting. "With BJ's loss, he's arguably No. 1 in the world. So you know what that makes it? A great opportunity for me. He's one of the best lightweights in the world, and it's on CBS. He's coming to fight me over here. It's ridiculous. It's just nuts, you know?"

Melendez views the fight as something of a coming-out party for him. He has been a member of the Strikeforce roster from the very beginning, won the promotion's lightweight championship in his second fight, and his Saturday fight with Aoki will be the sixth straight bout he's participated in with title implications (his Strikeforce belt will be on the line; Aoki's DREAM belt will not). Yet Melendez feels that his 17-2 record has gone underappreciated.

"If you're not in the UFC these days, it's hard to get ranked," he said. "When I lost to Josh Thomson, he took my spot in the top 10. I beat him, then he fell out of the top 10. If I beat Aoki, maybe he'll drop to six and I'll go up to five, and then you'll have like Frankie Edgar, Gray Maynard, Kenny Florian as 2,3,4. I don't know what they're going to do, but personally, if I beat this guy, I feel like I'm at least top five in the world."

Melendez admits that the current value put upon his accomplishments bothers him a little, but also added that doing something memorable in front of a big venue crowd as well as a national TV audience could do just the trick in getting him more noticed.

"I'm trying to get respect," he said. "I have to do something like [Strikeforce middleweight champion] Jake Shields. Jake wasn't getting respect. He beat like 15 guys in a row, and now people are finally starting to believe in Jake. Even where he was ranked at 170. There were and are guys ranked above him that shouldn't be there. Now he's top five at 185, too. So for me, if I just keep whooping butt, I want to leave no questions asked, and prove how good I am to everyone."

Aoki will be no easy stepping stone in his quest. The Japanese fighter, who is 23-4 with one no contest, is a submission wizard, with 14 victories coming via tapout, including five of his last six. In his last bout, Aoki infamously broke the arm of his opponent, Mizuto Hirota, who refused to tap out to a kimura. To that, Melendez says, "I'm a grown man. He might break my arm, but I might break his jaw ... It's fighting. It can get nuts in there. I ain't scared."

Melendez, after all, feels he had an ace up his sleeve in preparation, training with the Cesar Gracie camp. Not only did Melendez have the crafty Diaz brothers, Nick and Nate, to help, but he also had the aforementioned Shields, a jiu-jitsu black belt who outweighs him by around 40 pounds.

Melendez admits that he had bouts of nerves in the early part of his training camp while preparing for all of the wrinkles in Aoki's game, but after studying tape and having Shields play the Aoki role in grappling, he enters the fight feeling he's prepared for any eventuality.

"That's what Jake does; he's a master of takedowns and submissions," Melendez said. "And what's Aoki going to try to do to me? Takedowns. So sometimes I'm Dan Henderson and sometimes he's Aoki. But I believe Jake has way better standup and a better shot than Aoki, so it's making me really confident.