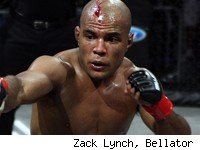 CHICAGO -- This is the Bellator live blog for Wilson Reis vs. Shad Lierley, a featherweight tournament quarterfinal bout on tonight's Bellator 14 card.

Last year's favorite Reis (9-1) returns to give it another shot at the tournament and he faces former IFL standout Lierley (5-2).

Round 1: Reis looking to set up the right. Reis attempts the takedown and Lierley defends. Reis tries again and gets it, but Lierley scrambles up quickly. Lierley tags Reis with hard punches. These two grapplers are slugging it out. They're swinging away until they clash into clinch. Reis takes down Lierley hard. Lierley playing guard off his back. Reis, a former BJJ world champ, passes easily to side and then full mount. Lierley escapes. Reis attempts the takedown but slips and Lierley almost gets on top. Reis just so strong. He lifts Lierley's left leg high. The fight goes to the ground and Reizs atempts the rear-naked choke. Lierley escapes. Reis looks for an armbar. Lierley escapes and takes Reis down momentarily. Reis scores one more trip takedown with 10 seconds left.

MMAFighting.com scores the round 10-9 for Reis.

Round 2: Lierley swings a huge right and Reis goes for the takedown. He ends up pulling guar. Reis so slick on the ground; he ends up putting Lierley on his back. Lierley traps Reis' right arm. Reis attacks with left hands in halfguard. Lierley tries to buck off. Reis lets him up. His corner wants Reis to set up the overhand right. Reis grabs a single-leg and dumps Lierley. Reis claims full mount. Lierley puts him back to halfguard with a minute remaining. Lierley escapes to closed guard. Reis attempts to score with punches to close out the round.

MMAFighting.com scores the round 10-9 for Reis.

Round 3: Reis initially looks for the big left but settles for the takedown. Reis has full mount with four minutes left. Lierley escapes to butterfly then closed guard. Reis works to left punches on his grounded opponent. Reis works and obtains full mount. Reis rains down left and rights. Lierley gives up his back and Reis finishes with the rear-naked choke.