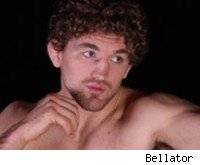 CHICAGO, Ill. -- This is the Bellator live blog for Ben Askren vs. Ryan Thomas, a welterweight tournament quarterfinal bout on tonight's Bellator 14 card.

Askren gets the loudest ovation of the night. A mix of cheers and boos. Thomas has the crowd's support.

Round 1: Thomas pumps out jabs. He lands two punches and Askren smiles. Askren goes right for the takedown and gets it. Thomas looking to play rubberguard. Thomas attempts a trinagle choke. Askren stands up and pulls his head out. Thomas looks for a heel hook, but Askren easily bypasses the attempt, right into side control. Askren attempts the choke and Thomas gets on top. Askren quickly gets back on top to work for the single leg. Askren takes himd own into side control. Askren attempts the Peruvian necktie/guillotine and the referee stops the fight. Thomas gets right up and complains about the stoppage. Thomas is in belief and his corner is livid.

It looks like Thomas has a good reason to be mad: From the replays it appears that the referee thought Thomas went to sleep. The crowd is chanting BS.

Askren wins by technical submission - Round 1, 2:40