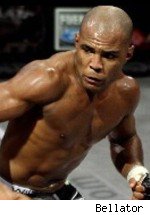 CHICAGO -- Ben Askren, Wilson Reis, Pat Curran and Toby Imada all won Thursday night at Bellator 14 to advance to the semifinals of their respective tournaments.

The biggest fight was also the most controversial, as Askren, a former Olympic wrestler who's widely regarded as one of the best prospects in MMA, won by first-round submission -- even though his opponent, Ryan Thomas, didn't submit. While Askren had Thomas in a neck crank on the ground the referee apparently thought Askren had choked Thomas out, but Thomas immediately popped up and said he was fine. There was nothing that could be done once the fight stopped, though, so Askren advances in Bellator's welterweight tournament.

Reis, the former EliteXC bantamweight champion, beat Shad Lierly in a very exciting fight in the Bellator featherweight tournament. The crowd in Chicago was fairly sparse, with more empty seats than fans at the Chicago Theatre, but Reis and Lierly had the few fans who were there going wild as they traded hard punches at the start of the first round and then stayed active after they went to the ground. But for all the action of the first round, the second was much more a tactical ground battle than a slugfest. In the third round, however, Reis finished the job, taking Lierly down, getting into mount and then transitioning to get his back where he sunk in a rear-naked choke that forced Lierly to tap.

Imada, who became a YouTube star last year when his inverted triangle choke was viewed hundreds of thousands of times on YouTube, earned another submission in the Bellator cage against James Krause Thursday night. In the second round Imada had Krause trapped against the cage, and when he sunk in the arm bar Krause couldn't move either hand, so he started yelling "Tap!" to get the ref to stop the fight.

In the first fight on the televised card, Curran knocked out Mike Ricci with a brutal punch in the first round. It was such a slow-paced fight in the early going that the crowd started booing less than a minute into the first round, but three minutes into the fight Curran landed a right hand to Ricci's chin that knocked him cold, and although Curran pounced and landed a few more punches on the ground, Ricci was already out and the ref jumped in to stop the fight.

Bellator's four lightweight semifinalists are now Curran, Imada, Roger Huerta and Carey Vanier. Huerta was considered the favorite heading into the tournament, and although Curran and Imada both looked good Thursday night, nothing that happened in the first four lightweight tournament fights has changed that. For Bellator, which is banking big-time on Huerta doing well, that may be the best news coming out of Bellator 14.