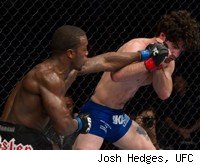 After just one fight, Jason High has been released from his UFC contract.

High, whose longest stint with a promotion was a three-fight stay last year with DREAM, took the release in stride.

"Received my UFC walking papers today, one door closes another opens ... You know how the saying goes," the Bodyshop Fitness Team welterweight posted on his Twitter.

Fighting in the opening bout of the UFC Fight Night: Florian vs. Gomi undercard on March 31, High lost to fellow Octagon newcomer Charlie Brenneman of the AMA Fight Club by unanimous decision.

Prior to joining the UFC, High (9-3) went 2-1 with DREAM with a notable win over Andre Galvao.