Gilbert Melendez Hopes He Never Hits the Ground With Aoki 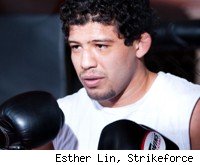 Gilbert Melendez considers himself a well-rounded mixed martial artist who can win a fight in a variety of ways. But he also knows that he's primarily a stand-up striker, and he knows that his opponent on Saturday night, Shinya Aoki, is the most creative submission specialist in all of MMA.

So it's no surprise that Melendez says he'd prefer never to go to the ground against Aoki.

Melendez said he has watched most of Aoki's fights and has noticed that in addition to having some sweet submissions, Aoki also has a knack for trying to "work the ref" and get opponents called for fouls. Aoki has twice won by disqualification when an opponent hit him low and he said he couldn't go on.

In Aoki's last fight, he broke the arm of Mizuto Hirota and then gave Hirota the finger as he lay on the ground in agony. But Melendez said that doesn't particularly concern him.

"First of all, breaking a guy's arm is part of the game," Melendez said. "The guy should have tapped out. My mentality stepping in the cage is kill or be killed, and I'm sure most top fighters have the same mentality. With him running around, dancing around and doing the middle finger? I thought it was a little uncharacteristic. It's really not my style, but I'm not one to judge Aoki."

Melendez credited training partners Jake Shields, Nick Diaz and Nate Diaz for helping him prepare to fight someone with world-class submission skills, but he acknowledged that no amount of training can completely prepare him for what he'll see in the cage on Saturday night, because there's only one Aoki.

"The thing with Aoki is he's a very intelligent fighter and it's obvious you want to stay on your feet with him," Melendez said. "Basically, you just want to keep it on your feet. Once he gets to the ground he has a great back attack, he has a great rubber guard, and you have to be prepared for all of those. As I study his tapes, I get scared of all those positions, but the closer I get to the fight I feel more confident about it. But, yeah man, just being prepared for all those positions on the ground."