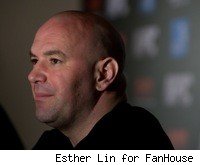 ABU DHABI -- MMA Fighting spoke to Dana White following UFC 112 in Abu Dhabi, and as expected, the focus was on Anderson Silva's controversial performance against Demian Maia. White said he was embarrassed by Silva's behavior during the fight and that this was his lowest moment as president of the UFC.