UFC Was Wrong to Lie About Chuck Liddell vs. Tito Ortiz 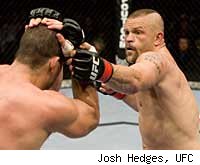 Reports surfaced on March 13 that Chuck Liddell would fight Rich Franklin in the main event at UFC 115 in June. The UFC confirmed the Liddell vs. Franklin main event on Monday.

During the four weeks between the initial reports and the confirmation, the UFC lied about Liddell vs. Franklin and pretended that Liddell would fight Tito Ortiz in June. That was wrong, and unbecoming of the sport's preeminent promotion.


More Coverage: BJ Penn: I Think a Rematch is in the Works

UFC President Dana White went on Twitter within hours of reports surfacing on March 13 to deny that the Franklin vs. Liddell fight was in the works and insist that a previously discussed fight against Randy Couture would be next for Franklin.

"Not true!" White tweeted. "We are doing Couture vs. Franklin, not Chuck."

Amid rumors that something had happened to jeopardize not just Ortiz's plans to fight Liddell but also his future in MMA, White said in a subsequent tweet, that there was nothing to see there: "Nothing happened to Tito," White tweeted. "Tito and I are cool."

Others associated with the UFC, including both Liddell and Ortiz, have also gone on the record as insisting that the fight would take place.All of these lies were, presumably, an effort to generate interest in the first two episodes of The Ultimate Fighter, on which Liddell and Ortiz are this season's coaches.

Can you imagine NFL Commissioner Roger Goodell lying about the New York Jets' offseason roster moves because he doesn't want to spoil a surprise on Hard Knocks? I can't. But that's essentially what White did.

The strange thing is, knowing in advance that Liddell would fight Franklin instead of Ortiz really wouldn't have dampened interest in this season of The Ultimate Fighter. The first two episodes have focused mostly on the fights among the contestants, and if anything, the knowledge that Ortiz won't make it to fight Liddell after the season ends could generate more interest in the remaining episodes, because viewers will want to know what happened with Ortiz and how Franklin came to replace him.

I can understand why the UFC discourages "spoilers" from The Ultimate Fighter -- the fights are taped in advance, and the promotion doesn't want viewers to know who won before the fights air. But this isn't the same thing. This is the promotion actively lying about what an upcoming main event will be.

Whatever the motivation was, there's simply no justification for lying to UFC fans about upcoming fights. The UFC got this one wrong.