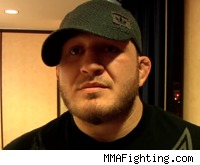 Las Vegas police officials were not available for comment on the charges Whitehead is allegedly facing when MMA Fighting tried to reach them early Tuesday morning, but according to the KLAS report, police arrived at his home to investigate the alleged sexual assault and discovered a marijuana growing operation.

[Editor's Note: MMA Fighting later spoke with LVPD spokesperson Officer Barbara Morgan, who confirmed that Whitehead is being investigated for the two charges, but that there were no current warrants for his arrest.]

The home reportedly had marijuana plants with an estimated street value of around $500,000.

The 28-year-old Whitehead came to some renown in the MMA world during season two of The Ultimate Fighter, during which he was a contestant. He lost to eventual season champ Rashad Evans, and later lost his only UFC bout in a decision to Keith Jardine.

Whitehead went on to fight in the IFL, Affliction, M-1 and most recently Strikeforce, where he's gone 1-1, beating Kevin Randleman while losing to "King Mo" Muhammed Lawal. His last fight, against Lawal, was in Dec. 2009. He is 24-8 in his career.