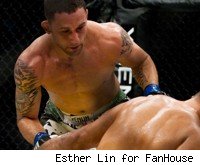 B.J. Penn's statement on Tuesday morning that he's expecting to get a rematch against Frankie Edgar, the man who defeated him by unanimous decision at UFC 112, motivated me to watch Saturday's Penn-Edgar fight again and see how close it was, whether I changed my mind about who deserved to win, and whether I think an immediate rematch makes sense.

Short answer: It was really close, I didn't change my mind, and I'm looking forward to the prospect of Edgar-Penn 2.

Only three people's opinions really matter, though, and they all gave it to Edgar: Judge Doug Crosby scored it 50-45, judge Sal D'amato scored it 48 - 47 and judge Andy Roberts scored it 49 - 46.

Doug Crosby's 50-45 score has upset so many people that it has overshadowed a lot of the discussion of the fight. Yes, the fight was a lot closer than 50-45 would suggest, but on watching it again today, I was struck by not only how close the fight was as a whole, but also how close all five rounds were. Judges score the fight round by round, not as a whole, and I wouldn't have been totally shocked to hear scores of 50-45 either way, or anything in between. This was a fight with five really, really close rounds.

I also think everyone who follows MMA should take a close look at the judging criteria (see rule 13:46-24A.13 on the New Jersey State Athletic Control Board web site). When you read those criteria, you see how subjective judging can be. Effective striking, for instance, is "judged by determining the total number of legal heavy strikes landed." But two reasonable people can watch the same strike and disagree about whether it was "heavy" and whether it really "landed." (Those criteria also say 10-10 rounds should be "rare," so even though all five rounds were close, I'm not surprised that none of the judges scored any of them even.)

I still think Edgar deserved to win by a score of 48-47, but I'm not about to criticize the people who had scores that differed from mine. And I'd love to see a rematch in which one of the fighters takes it out of the judges' hands.