Gilbert Melendez Out to Boost Credibility of Strikeforce Belt 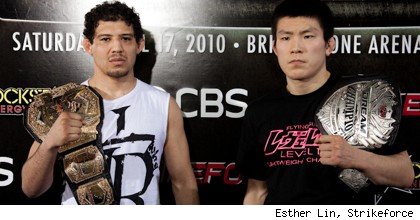 Gilbert Melendez has always been considered a respectable lightweight by the diehards and he'll have the opportunity to force the mainstream audience to take notice if he can beat Shinya Aoki at Strikeforce: Nashville on April 17.

In an exclusive interview with MMAFighting.com, find out where Melendez believes he deserves to be in the rankings if he beats Aoki, Melendez's take on Aoki's transitioning to fighting MMA under Unified Rules (and without long pants) and why he thinks Aoki is a "savage."

Ray Hui: This has been a fight you've been wanting for awhile. Is it a bit surreal to know that this fight will actually be happening?
Gilbert Melendez: I still didn't believe it at first for a second. I didn't believe it until [the open media workouts] when I saw him with my own eyes. He showed up here all the way from Japan to let me know he's going to come here and break my arm. So I'm like "Alright, man. It's going down for sure." It's just a lot of excitement. I'm really happy that I'm fighting the No. 2 fighter in the world and that Scott Coker made it happen. The biggest star from Japan is coming all the way to the US to fight me. It's pretty cool. I think it's really neat and I'm just trying to live in the moment.

Aoki has a certain mystique to him with him coming from Japan, his odd behavior at times and doing as little press work as possible. What was your first impression of him when you saw him in person?
I don't speak Japanese so it's a little difficult to get that. But you know, he tried to give me a little mug on the corner. I just smiled at him and waved. I'm saving my energy for the fight. I saw him a couple of times (afterwards) at the hotel. I gave him a wave and he waved back. Initially he had the aggression in there and game face on, but right now is neither the time nor the place for me. And I think he got the idea. We're going to try to kill each other during show time, but as of now, he's been pretty respectful to me. He hasn't done anything disrespectful. Let's just put it that way.

As mentioned earlier, this is a fight you asked for. Which has more meaning for you? Beating a the No. 2 ranked Aoki or representing Strikeforce?
I think both. I'm trying to bring credibility to the weight class here. I think Josh (Thompson) and I proved we're very tough when we fought each other, but it's not like anyone moved up in rankings. Both of us were ranked in the top 10, so just one of us falls off. I feel like if I beat Shinya Aoki, it'll be great for me and it'll be great for the organization and bring some respect to the title and the organization. I think that's what Jake's trying to do at 185 as well. I think that's what Nick's trying to do at 170 and I'm trying to do that at 155, here. And yeah, of course this is for myself as well. I feel like I'm a strong employee for Strikeforce now and I feel very strongly about that. I wanna be good for them.

Do you think this fight puts you at No. 2 if you beat Aoki? (Editor's Note: Interview took place prior to UFC 112)
I wouldn't say No. 2, but I would say I deserve to be in the top five now. I think I cracked the top 10 this past year and I think I deserved it and if I beat Shinya Aoki, I do believe I belong in the top five. I think Shinya and BJ are the two guys that standout amongst all the other 155 pounders. I think if you go down the list from No. 3 to No. 10, any of those guys can beat each other on any given day. It would mean a lot to me if I could beat Shinya.

When you look at Aoki's style, do you think it'll be difficult for him to duplicate his success in the States with the Unified Rules? Luckily, no elbows with Strikeforce, but no 10-minute first rounds has to be a negative for him.
I think you're the first person that brought up the 10-minute round thing, but if anything, I think that's where he benefits the most. With 10-minute rounds, he can take you down and work for submissions. Most people (might think) the cage, but more than anything I think it would be at a disadvantage because it does take time to get the takedown, get the position to submit, and finally submit. But Shinya's a smart fighter. I've been to Japan and have fought in a ring and won. And I got used to it, and I'm sure he'll adapt fine.

Another thing Aoki won't have the benefit or disadvantage of is the long pants. Would you have preferred to fight him with him wearing long pants?
I think he'll figure it out. That George Sotiropoulos who fought Joe Stevenson, he managed to wear tights up this knees and then he had kneepads and ankle (wraps). There's loopholes now, but if he wanted to wear his pants, I wouldn't really stress on it. I really don't care. But rules are rules, and if the rules say no pants, who is he to break the rules. Honestly, I really don't care.

Did you get a chance to study his fight against Vitor "Shaolin"? That's probably the best look at him when it comes to standup. Do you think he's going to even consider standing with you?
I believe he's a smart fighter and he'll be ready for every scenario and area. Just like I'm prepared to -- I wanna stand with the guy but I also will be prepared if he does take me down. I thlnk he'll be ready for it. Will he be willing? I don't know. But, I did see that fight. I was happy because I got to learn a lot about his standup right there. Obviously, he loves that big left kick, all day. It was actually nice to see that. And actually the last round when Shaolin took him down, I was able to see him neutralize that rubberguard without too much of a problem. Some of these fights make me nervous and some helps me build confidence and that was a fight that helped me build confidence.

What are you thoughts on going against someone who has a reputation for breaking limbs?
That's why we sign the contract. There's risks when we fight. You can get knocked out, you can get put to sleep, you can twist an ankle, you can break an arm, and that happens. Hirota, if he didn't want his arm to be broken, maybe he should have tapped out. It just makes that guy's mystique so much cooler. I think Aoki's a savage. He's a tough fighter. It'll pump me up a little more. Him wanting to break my arm is like me wanting to knock him out. It's just the way the sport goes.

If Aoki doesn't get the takedown, we've seen him do flying guard pulls. Is that something you're keeping an eye on?
The first fight against JZ, JZ was actually able to stuff that flying, jumping guard stuff. The second fight, JZ wasn't as cautious and he did get caught. If you watched the first fight, JZ was able to keep a nice distance, sprawl and you can actually see the anxiety build up in Aoki. And that's another good fight I like to watch as well.

Your friend Jake Shields is headlining the card. What it's like to fight on the same card as him, knowing that you can't help each other out as much as you would like?
I mean, it's great. We definitely train hard when we do train together. Sometimes I got to train my own thing and sometimes he got to train his own thing. Especially this time when we're fighting two opposite fighters. It gets intense when we're there together and for this one, we do have to go outside of the box a little, but there's never a problem. We've always train hard together and it's great.