B.J. Penn: I Think a Rematch Is in the Works 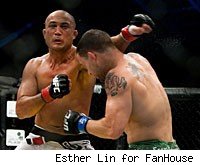 Three days after he lost the UFC lightweight title to Frankie Edgar at UFC 112, B.J. Penn said he believes he'll get an immediate rematch with Edgar, and that he'll be fighting for an opportunity to get the belt back within the next two months.

"The UFC contacted us yesterday, and I think they want to put a rematch together, so I think a rematch is in the works," Penn said Tuesday morning in an interview with 106.7 The Fan in Washington, D.C.

Asked when that rematch would take place, Penn indicated that he thinks he, Edgar and the UFC are all prepared to do it quickly.

"I think the next three months, four months at the most," Penn said.

The three or four month range would indicate that Penn vs. Edgar 2 could be the main event at the UFC's tentatively scheduled August 28 pay-per-view show in Boston. If the UFC really wants to give fans a great fight for free, it could also possibly be the main event of the August 1 Versus show in Oakland, although it's a long shot that a title fight would be carried live on basic cable.

But whenever the fight happens, all indications are that Penn will get an immediate rematch, and it's a rematch that makes a lot of sense. Although all three judges gave the fight to Edgar, many observers thought Penn should have won the decision. And the UFC just doesn't have a lot of big-name lightweights who could carry a main event against Edgar. From a competitive standpoint, it's probably not fair to Gray Maynard, who is undefeated and already has a win over Edgar, to make him wait for a title shot. But from a business standpoint, Penn getting an immediate rematch is the right call.