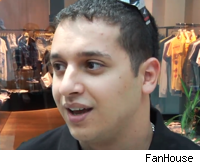 ABU DHABI, United Arab Emirates -- MMA Fighting recently spoke to Soheil Nemri, the promoter for upstart Abu Dhabi Fighting Championship, about the new promotion's inaugural event on May 14. Nemri broke the news to MMA Fighting that the event will host an eight-man open weight grand prix with a 1 million dirham purse (approximately $270,000) and will feature well-known names from around the MMA world, including veteran heavyweight Sergei Kharitonov.

Watch below as Nemri's outlines ADFC's plans for the future and discusses some of the details surrounding their first event.