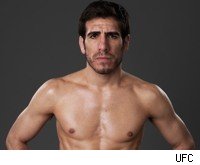 Kenny Florian was admitted Monday to a Boston hospital and will go under the knife to treat a staph infection on his knee.

"Being admitted to the hospital," Florian posted on his Twitter. "Not good. Minor surgery & IV antibiotics on the way. Damn!!"

Florian included a photo of his knee and if you would like to see the potentially stomach-turning photo, click here.

Florian contracted bursitis prior to his Takanori Gomi fight and has been on antibiotics to remove the infection. However, the condition worsened and further actions were required.

In between his staph infection updates, Florian also commented on the fights over the weekend, including the championship bout that could influence the direction of Florian's next fight.

"Frankie really did a great job against Penn," Florian said. "Fans made it seem like Penn was robbed. Didn't necessarily see it like that. Close fight though."

Florian added: "Not sure why everyone asks me what Edgar win means for me. I don't put fights together. I'll fight whoever UFC gives me."

Florian is coming off a win on March 31 against former PRIDE champion Gomi and is widely considered to be the No. 2 lightweight in the UFC.