Gegard Mousasi Wants to Be Heavyweight Champion of the World 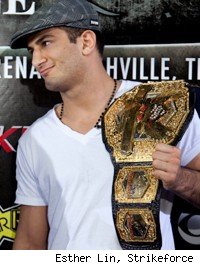 Gegard Mousasi sets lofty goals for himself. So far, he hasn't had any trouble reaching them.

The 24-year-old Mousasi wasn't expected to win Dream's middleweight Grand Prix in 2008 and wasn't expected to win Strikeforce's light heavyweight title in 2009. But he managed both, and as he prepares to defend his Strikeforce belt against Muhammed "King Mo" Lawal on April 17, he says his ultimate goal is to be the heavyweight champion of the world.

But that's a long way off. In an interview with MMAFighting.com, he said that for now, all he's focusing on is Saturday night's fight.

Michael David Smith: What do you think of King Mo as an opponent?
Gegard Mousasi: He's good. He's experienced -- not as experienced as a fighter as I am, but experienced with wrestling. He's the opponent I've been asking for, he's a dangerous opponent and it's a good fight.

In some ways is he a step down for you? You've had 31 pro MMA fights. He's had six. Isn't that experience a big advantage for you?
Certainly, I'm the champion and he's the challenger, but I think his wrestling experience is big: He's been competing for a long time. I'm not taking him lightly. I'm more experienced in MMA but I'm not thinking that I'm a better fighter than him.

This will be your third fight in the United States. You've previously fought in Holland, Finland, Ireland, Russia, Canada and Japan. How do you like fighting in the U.S.?
It's a great opportunity. I'm fighting now for the second time on CBS and that allows me to reach millions of fans. I like fighting in America. MMA is very big here and I enjoy seeing these fans.


You're only 24 years old and you've already won 28 fights, not to mention that you've won some fights as a professional kickboxer and had some success as an amateur boxer. How do you explain how you've been able to do so much in such a short time?
I've surrounded myself with the right people. I have great people around me, I have great training partners, and I think if you really want something you work for it and you get it.

You talk about surrounding yourself with the right people. One thing you did recently is separate yourself from M-1 Global. Can you explain why you did that?
They offered me a contract, and then I came back to them with what I wanted on their end, then they said, 'No, we can't do that' and that made me not want to be with them anymore.

What kind of relationship do you have with Fedor Emelianenko?
I consider him a friend. He's a very nice guy. He has worked hard. I think sometimes he finds all the promotional stuff to be straining. He's a very good person.

Do you have any insight as to when he'll fight again?
No. I don't know anything more than what I read on the Internet.

Back to your own fighting: What are your goals for this year as a fighter? Will we see you in Dream, in Strikeforce, will we see you doing any professional boxing or kickboxing?
No boxing this year. I'm going to be busy. I'm fighting for Strikeforce in April, then I'll start the Dream light heavyweight tournament in May, then I'll be back to Strikeforce, then the next round of the Dream tournament, and I hope to fight in Japan in New Year's Eve as well. It's a busy schedule and I just hope to win all my fights.

You said you won't box this year. Is being a professional boxer some day something you want to try?
Yes, but that's just something I want to try for myself. It's not like I think I'm going to make more money as a boxer. It's just a personal challenge, I'd like to see how I can do as a boxer.

What about the UFC? Will we ever see you there? Dana White has said he'd love to sign you.
I'm very happy with Strikeforce. I enjoy being part of the team. I may sign with the UFC after Strikeforce but there's really no reason for me to go. I've been treated very well, both in Strikeforce and in Dream, and I'm very happy where I am.

You say there's no reason for you to go, but there's one big reason that I think the fans would like to see you in the UFC: You'd get to fight the best light heavyweights in the world, guys like Lyoto Machida, Shogun Rua, Rashad Evans or Rampage Jackson. Wouldn't signing with the UFC appeal to you for that reason?
So far I have fought Sokoudjou and Babalu and now I have King Mo -- so far they have found good opponents for me in Strikeforce, and I think they're continuing to build. Would I fight good fighters in UFC? Yes, that would be a good challenge, but I'm not going to say I want to fight those guys you named because that's not a possibility. They're in a different organization. I'm really not thinking about fighting them. I'm only thinking about fighting King Mo.

Do you think you'll fight Dan Henderson later this year?
Definitely. That's part of why I think Strikeforce will keep giving me good opponents.

Will you continue to fight at light heavyweight? You won Dream's middleweight tournament. Could you possibly move down in weight class?
No. I'll fight at 205 or higher. I wouldn't go any lower. I don't think that's healthy for my body. I won't go below 205.

How much do you weigh in between fights, before you start to cut weight?
When I'm really focusing on my weight training I've been up to 233 at my highest but usually walk around at about 220.

If you get up to 233, that's Fedor's size. Could you compete at heavyweight?
Absolutely. Heavyweight is definitely a possibility. At my height, I could fill out more. It's a possibility, but not right now.

What's your ultimate goal in this sport?
To be a three-division champion. I was champion in Dream at middleweight, I'm champion in Strikeforce at light heavyweight, and my final goal is to be heavyweight champion of the world.