Fedor Interested in Silva Fight if Werdum Falls Through 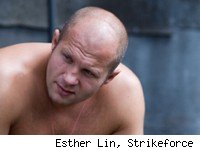 Fedor Emelianenko says Antonio Silva could be his next opponent if negotiations to fight Fabricio Werdum fall through.

Fedor revealed the back-up plan and reiterated his commitment to M-1 Global (he owns a stake in the company) during a press conference at the M-1 Selection Eastern Europe event over the weekend in Moscow. Translation provided by LowKick.com:

"I have no intentions leaving M-1 Global," Fedor said. "We have a very good partnership, so I don't see any reasons why I should break-up my current deal with that organization. My next opponent will be Fabricio Werdum. We are currently negotiating with his team, but if something goes wrong we will try to reach an agreement with Antonio Silva."

After making his Strikeforce debut last November against Brett Rogers, Fedor was supposed to fight on the upcoming CBS card, but M-1 Global has been renegotiating -- and still is -- to alter the terms of their Strikeforce agreement.

Both parties have expressed optimism in the deal being finalized and the Fedor-Werdum fight is being targeted for June 26 in San Jose, Calif.