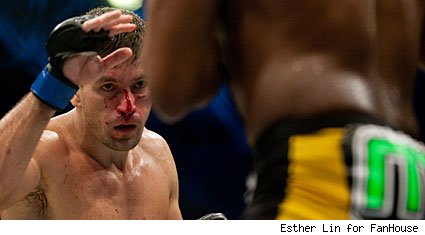 Shortly after Anderson Silva taunted Demian Maia through an easy unanimous decision victory at UFC 112, Silva claimed that he was angered by Maia showing him disrespect before the fight.

But Maia says it was Silva who was disrespectful.

In a post-fight interview posted at UFC.com, Maia said Silva was showing him a lack of respect and swearing at him in Portuguese in the Octagon.

"He was very disrespectful to me but no problem, it's his way," Maia said. "After the fight he said he apologized but I don't think it's right for him to do that during the fight. He was swearing to me in the middle of the fight. It's his way, it's OK, he's the best in the world, and I want to get ready to fight against him again."

"I do want to say sorry that it took me so long to get in the fight," Maia said. "I never fought five rounds before so I was trying to hold down a little in the first few rounds but then after I got hit, the motion of the fight, I started to fight better but he was winning already."