Anderson Silva Should Move to Heavyweight 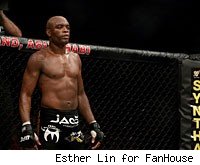 Since defeating Dan Henderson to unify the UFC and Pride 185-pound titles a little more than two years ago, Anderson Silva has defended his middleweight belt three times. They were, by far, the three worst showings of his UFC career.

In case you've forgotten how those fights went, here's a quick refresher:

-- At UFC 90 in 2008, Silva toyed with Patrick Cote for two rounds before Cote slipped and hurt his knee in the third, ending the fight just as the fans were starting to get restless with Silva's fooling around.

-- At UFC 97 in 2009, Silva toyed with Thales Leites for five rounds before winning a unanimous decision that left the fans booing.

-- At UFC 112 on Saturday, Silva toyed with Demian Maia for five rounds before winning a unanimous decision that left the fans booing.

Silva has made it clear in his last three UFC middleweight title defenses that he just isn't particularly interested in fighting guys he knows he can beat easily. Part of this is that Cote, Leites and Maia didn't bring the fight to Silva, but a larger part of it is that Silva thrives on being challenged, and there aren't any challengers for him at 185 pounds. Yes, I know, Chael Sonnen and Vitor Belfort would beg to differ, but I just don't believe there's anyone in the middleweight division who's going to bring out the best in Anderson Silva.

You might think that means Silva should move up to light heavyweight, where he's had a couple of spectacular first-round knockouts against James Irvin and Forrest Griffin. But I just don't see that working out very well, either. The top four light heavyweights -- Lyoto Machida, Shogun Rua, Rashad Evans and Rampage Jackson -- are all busy fighting each other right now, and other than those four, I don't see any light heavyweights giving Silva much of a challenge, either.

So I propose that Silva's next fight should be at heavyweight.

It seems crazy for a middleweight to move all the way up to heavyweight -- especially when it's Silva, who said this week that he could actually move down and fight at welterweight. Is a guy who was just talking about fighting at 170 pounds really capable of beating opponents who weigh up to 265 pounds?

Yes, he is. Silva is capable of beating anyone.

So which heavyweight would Silva fight first? In my fantasies, he'd fight Fedor Emelianenko, but in the real world that's not going to happen. It also wouldn't be Brock Lesnar or Shane Carwin, who are going to fight each other for the heavyweight title in July, and it wouldn't be Cain Velasquez, who will get the Lesnar-Carwin winner, or Junior dos Santos, who's a friend and training partner of Silva's.

So that leaves Frank Mir as my top choice. That's a fight Silva has asked for in the past, so we know he'd be motivated, and Mir has said he'd love to do it. It would be a fascinating fight: Is Silva's lethal striking enough to beat a much bigger, stronger man like Mir? I'd be thrilled to find out.