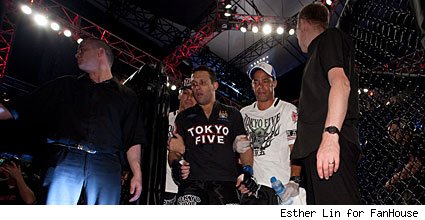 A battle between a wrestler and a grappler stayed almost entirely on the feet as Matt Hughes overcame a sluggish start to knock out Renzo Gracie late in the third round of their fight at UFC 112.

For Hughes, the victory was his 17th in the Octagon, breaking a tie with Chuck Liddell for the most in UFC history. As if there was any doubt before, there can be no doubt now that Hughes is one of the very best fighters in the history of mixed martial arts.


Hughes is a wrestler and Gracie comes from the first family of Brazilian jiu jitsu, but both of them seemed very comfortable keeping the fight on their feet in the early going, with Gracie landing the cleaner and more effective punches and also landing a couple of kicks. It wasn't the most exciting of rounds, and it could have gone either way, although I personall scored it for Gracie.

Hughes started the second round with a couple of very powerful leg kicks, but after that Gracie returned to his in-and-out punching style and continued to employ it very effectively against Hughes. At one point Hughes got double underhooks and managed to take Gracie down briefly, but Gracie got right back up. I gave the second round to Gracie as well.

In the third round Hughes connected with a right hook to Gracie's chin, backed away and then connected with a leg kick and another punch. That backed Gracie up against the fence and Hughes started to take control, and with two minutes to go in the fight he knocked Gracie down with a leg kick. Gracie took all the time he could before Hughes finally helped him up and then dropped him with a second leg kick. Gracie stalled again, and then when he finally stood up Hughes floored him with a punch, let him get up and then attacked again. Hughes finally knocked Gracie down with a fourth punch, and at that point referee Herb Dean ended it.

"I was pretty happy," Hughes said afterward, adding that he wanted it to be a stand up fight because, "fighting a Gracie, I had to keep the odds in my favor."

The 43-year-old Gracie, who hadn't fought in three years, was asked afterward if he should have fought an easier opponent than Hughes in his comeback match. But he dismissed that thought, saying, "What kind of fighter would I be if I did that?"

Gracie is a great fighter. But Hughes showed on Saturday that he's even greater.