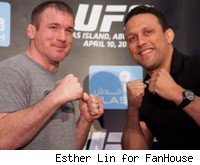 This is the UFC 112 live blog for Matt Hughes vs. Renzo Gracie, a welterweight bout on today's UFC 112 pay-per-view card in Abu Dhabi.

Gracie makes his long-awaited UFC debut and faces another future Hall of Famer in the sport, Hughes.

Round 1: Touch of gloves. Hughes misses a roundhouse kick. Hughes lands a kick to the body. Gracie with punches, but really just testing the waters. Gracie lands a a short combo. Gracie swings and misses an overhand. Gracie gets through with punches and Hughes goes to his wrestling. Gracie defends and separates at 2:45. Hughes punches and gets double underhooks. They separate with two minutes left. Hughes hits a leg kick. Gracie rushes in with punches and Hughes dodges. Hughes chops to legs. Gracie with a front kick.

MMAFighting.com scores the round a draw.

Another tough round to score and possibly another draw. Slight edge to Hughes for his leg kicks. 10-9 Hughes.