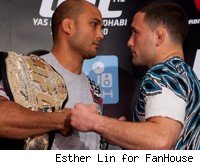 This is the UFC 112 live blog for BJ Penn vs. Frankie Edgar, a lightweight championship bout on today's UFC 112 pay-per-view card from Abu Dhabi.

Penn has been unbeaten as a lightweight for the past eight years as he heads into his fourth 155-pound title defense.


Penn looks like he had a good cry before walking out, and so did his trainer.

MMAFighting.com scores the round 10-9 for Penn.

MMAFighting.com scores the round 10-9 for Penn.

Very close round and Edgar's best. 10-9 barely for Penn.

MMAFighting.com scores the round 20-9 for Edgar.

Round 5: If Edgar wins this round, he can conceivably win this fight. I gave Penn round three, but it could have also easily have gone to Edgar. Edgar takes down Penn! They are in guard for a few seconds before Penn gets back to his feet. Edgar's high kick is blocked. Penn with a leg kick. Edgar with a leg kick. Edgar comes in and is countered. Edgar pops a quick right. Edgar tries two takedowns but no go. Edgar with a left hook. Edgar stlll active while Penn has slowed down. Penn lands a right in middle of combo. Penn looks intense for a moment. Edgar wraps around back of Penn at sound of bell.

Tough fight overall to call. Final round for Edgar. I have it 48-47 for Penn, but easily could have gone either way.