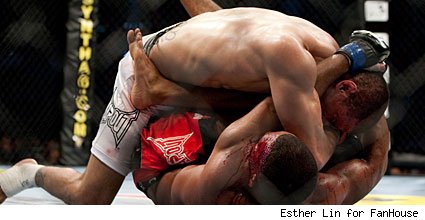 Munoz and Grove took the honor for the Fight of the Night in the pay-per-view opener that saw Munoz fighting off submissions to come from behind and finish Grove with punches.

Dos Anjos earned the submission of the night for his armbar against rising star Terry Etim.

In the Knockout of the Night, Johnson landed a kick to the body to finish Brad Blackburn in the third round.

According to the UFC, there was sellout crowd of 11,008 in attendance at the newly-built Concert Arena in Yas Island for a gate of $3.5 million.