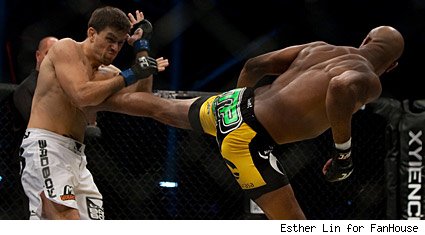 Anderson Silva retained his UFC middleweight title with one of the most bizarre fights in the history of mixed martial arts on Saturday in Abu Dhabi, defeating Demian Maia by unanimous decision at UFC 112 in a fight that consisted of Silva landing plenty of powerful punches and kicks but spending more time dancing around and taunting Maia than fighting him.

Silva was very content to allow Maia to get things started, hanging back at the beginning of the first round and only coming forward a couple of times for leg kicks. Midway through the first round Silva lunged on the ground in front of Maia, practically begging Maia to come forward, and yet Maia wouldn't take the bait. Finally Silva landed a punch that briefly dropped Maia, and he later landed a flying knee that dropped Maia as well. Overall Silva spent most of the first round dancing around on his feet, knowing that Maia isn't in his league as a striker and that he could do whatever he wanted as long as he was standing up.

The second round was more of the same, and Silva began to openly taunt Maia, begging Maia to come forward and growing visibly angry when Maia decided to hang back and hope for an opportunity to secure a takedown. Silva started to clown around so much that some of the fans in attendance could be heard laughing while others started booing. Maia never did anything to even remotely put Silva in danger, and Silva easily won the round again, bashing Maia's eyes and nose with occasional punches while he wasn't fooling around.

During the third round Silva started by standing still, then landed a few kicks and then messed around with Maia some more, then landing more kicks and dancing around in front of Maia again. During the third round UFC announcer Joe Rogan said that Silva "has got no respect for his opponent," and that was just about the size of it: Silva was playing with Maia the way a father would play with his young son in a living-room wrestling match.

By the fourth round the crowd appeared to have turned on Silva for all his joking around, and they started to chant Maia's name. Then they started chanting, "GSP," as if to say they wanted UFC welterweight champion Georges St. Pierre to fight Silva and give him a tougher test than Maia could. By this point Maia's nose was badly bloodied, and the blood had dripped down onto his trunks to turn his white shorts pink.

By the start of the fifth round Maia's nose was bloodied badly and his left eye was swollen shut, but Maia showed a lot of heart in beginning to go on the attack with his striking, swinging hard and even landing a few punches. Silva started to look like he was tired, not so much from fighting as from all the dancing he had been doing. The crowd began to chant Maia's name loudly, and Maia even started to raise his arms in front of Silva the way Silva had to him. Silva responded to that by doing more screwing around -- so much that referee Dan Miragliotta warned Silva about stalling and threatened to take a point away. The fight ended with the crowd booing Silva, who won his fight his way, not the way the fans wanted to see.