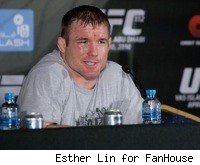 Hughes discussed his game plan for the fight, competing in a hostile environment and how many times he would like to fight before he calls it quits.