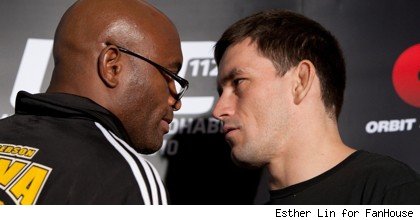 For the second time in just two weeks, the UFC is putting two belts on the line in one pay-per-view event on Saturday when UFC 112 takes place in Abu Dhabi. UFC middleweight champion Anderson Silva will take on Demian Maia and UFC lightweight champion B.J. Penn will take on Frank Edgar in one of the best fight cards of the year. We have the full preview and predictions below.

When: Saturday, with the pay-per-view card starting at 1PM ET. You can watch it live here at MMA Fighting.com.

Predictions on the five televised fights:
Anderson Silva vs. Demian Maia
Maia might be the best pure submission grappler in all of mixed martial arts, and if he gets the fight to the ground, he certainly has a chance of submitting Silva. But that's not how I see the fight playing out. Silva is so much better than Maia on his feet that I think we're going to see Silva toying with Maia in the stand-up game and never getting into any trouble on the ground.
Pick: Silva

B.J. Penn vs. Frank Edgar
With Silva vs. Maia, the Brazilian jiu jitsu skills of the challenger make it easy to see a path toward an upset, even if you don't think the upset is going to happen. With Penn vs. Edgar, it's hard to find anything Edgar does better than Penn and therefore even harder to figure out a path toward an upset. It's always possible because everyone is beatable, but I think Penn is going to dominate just like he's dominated the five other lightweights he's fought during his current UFC run.
Pick: Penn

Matt Hughes vs. Renzo Gracie
Much like Randy Couture vs. Mark Coleman in February, this fight features two guys who have name value thanks to their past accomplishments but whose best days are behind them. And I think this fight will be as one-sided as that fight, too: I like Hughes to use his superior wrestling to take Gracie down and beat him with ground-and-pound much like Hughes did to Renzo's cousin Royce Gracie.
Pick: Hughes

Terry Etim vs. Rafael dos Anjos
They love submission grappling in Abu Dhabi, so they should love this battle of Brazilian jiu jitsu black belts. I think Etim, who has won the Submission of the Night award in his last two fights, has a better overall MMA ground game and should beat dos Anjos.
Pick: Etim

Kendall Grove vs. Mark Munoz
Grove, the former Ultimate Fighter winner, is difficult for any opponent to prepare for because of his 6-foot-6 height and long reach. But I like Munoz, a former NCAA champion wrestler, to get inside on Grove and win the fight on the ground.
Pick: Munoz