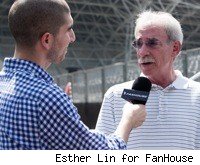 ABU DHABI, United Arab Emirates -- The man in charge of getting MMA legalized across the world is the UFC's vice president of regulatory affairs, Marc Ratner. MMA Fighting spoke to the former Nevada State Athletic Commission executive director Wednesday at the Concert Arena prior to UFC 112 about the challenges involved in bringing the UFC to Abu Dhabi and the sport's future in Ontario and New York.