Trainer John Hackleman Would Have Preferred Chuck Liddell to Retire 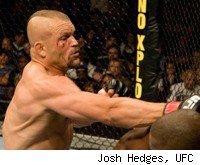 About a year ago, Chuck Liddell faced the decision of whether to hang up his gloves or give it one last run in the octagon. He obviously chose the latter, but his trainer didn't necessarily agree with him.

It's not quite what you think though.

While John Hackleman said he would have preferred Liddell to call it a career, it was due to selfish reasons rather than any reflection on "the Iceman."

"I would always rather him not fight any more, just because he could help me train the guys more," Hackleman said on a recent edition of Inside the Ultimate Fighter. "I told him it was up to him. He has to wake up every morning and look in the mirror. I don't. But I would rather he retire just because we could run the team and hang out. But it was up to him. It wasn't up to Dana [White], it wasn't up to anyone else but him."

Hackleman, who runs the California-based Pit gym and is an assistant coach on this season of TUF, said Liddell hadn't even yet made a final decision on his future when the offer to coach TUF came along. He and Liddell had planned to go to Hawaii and further discuss the issue, though Liddell had already indicated to fans and media that was likely to continue.

Earlier this week, UFC President Dana White shot down rumors of an opponent switch for Liddell and reiterated that he would indeed face Tito Ortiz at UFC 115 in June, adding a third chapter to the Liddell-Ortiz series.

It is one of MMA's only feuds that is truly fueled by anger, and dare we say it, hatred, but the boiling blood that seems to rise whenever Ortiz's name is mentioned to Liddell doesn't extend to the man that will prepare "The Iceman" for battle.

In fact, Hackleman not only doesn't hate Ortiz; he actually likes him.

"I'm still going to train [Chuck] to knock his ass out," Hackleman continued. "So that's all that matters. But if Tito was in the room hanging, I'd love to hang with him. I think he's great for the sport and I think he's a great fighter. He's one of the original guys who made the UFC what it is today, definitely."