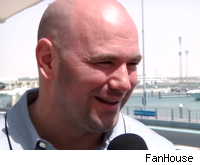 White spoke about the UFC's first card in Abu Dhabi, working with Zuffa's new partners, Flash Entertainment, putting on an event in Afghanistan later this summer, the possibility of seeing Anderson Silva vs. Georges St-Pierre at welterweight, BJ Penn's future at 155 pounds and a recent report which stated he owed the Bellagio Hotel & Casino a large sum of money due to a gambling debt.