Should Phil Davis-Alexander Gustafsson Match Be on UFC 112 Main Card? 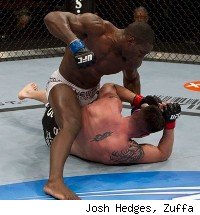 It isn't too often that we see two undefeated young stars matched up against each other in a major event, but UFC 112 has the distinction of such a bout, pitting light-heavyweights Phil Davis and Alexander Gustafsson in combat.

Unfortunately for fans, we may not get to see how the 5-0 Davis fares against the 9-0 Gustafsson, because the fight is not scheduled to air on the pay-per-view broadcast. But should it be?

Clearly, there's no argument about the top three fights on the card requiring airtime. The middleweight title bout featuring Anderson Silva against Demian Maia, the lightweight championship matchup pitting B.J. Penn against Frankie Edgar, and the welterweight legends clash between Matt Hughes and Renzo Gracie are all obvious choices for screentime.

That leaves two slots. The UFC puts a lot of time in deciding which fights will air, and there's usually strategy behind the choices. In doing so, the company has opted to round out the broadcast with a lightweight fight between Terry Etim and Rafael dos Anjos and a middleweight scrap between Kendall Grove and Mark Munoz.

Etim and dos Anjos probably got the nod because they're likely to put on a crowd-pleaser as the lightweights often do. In addition, the 24-year-old Etim is quietly in the midst of a four-fight win streak, and with the promotion always on the lookout for potential title challengers, why not take a chance to spotlight him as a potential future contender? His British background doesn't hurt either, as the UK is a strong market for the UFC and therefore, developing British contenders is always a plus for the company.

The inclusion of the Grove-Munoz fight is a little more head-scratching. Neither man is in the title hunt. Grove split his last two fights and is 3-3 in his last six while Munoz rebounded from a UFC debut loss last March to win two in a row. A possible motive comes from Dana White's previous statements that the UFC hopes to eventually do a show in The Philippines (Munoz is of Filipino descent). Though nothing is currently planned, it could be long-term thinking. Another plausible reason behind it is the fact that many inhabitants of Abu Dhabi -- the site of UFC 112 -- are expatriate workers from The Philippines. Munoz could prove a draw to them.

Still, the decision to leave Davis and Gustafsson out of the spotlight has to be a bit disappointing to fans. Of course, there is a possibility that they make the broadcast as a filler bout if their match ends quickly and decisively, but there's no guarantee of it. Davis particularly has a lot of hype and interest behind him, and against another undefeated fighter, it's a rare matchup of unbeatens that many fans unfortunately won't get to see.