Roger Huerta: Locked In a Cage, But Finally Free 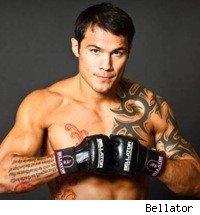 Just six weeks ago, the mind of Roger Huerta was clouded by an unsure future. Sometimes it was racing with possibilities, and sometimes it was blank for answers. It wasn't too long before when Huerta needed a break from fighting, but by now he had come to realize it's value to his life. And he wanted a fight. He needed a fight.

On Thursday night, Huerta will make his debut for Bellator in the main event of its season two debut, taking on Chad Hinton. Six weeks ago, however, his fate was unsealed and negotiations were dragging on with no end in sight, so Huerta took off to Phuket, Thailand to lighten the load on his mind and sharpen his striking skills.

It was then that everything came together.

For months, Huerta had been anxious to see where his fight career would next take him. Taking a hands-off approach to his contract issues, he gave his manager Jeff Clark the reigns to his career and waited. And though there was plenty of interest, nothing was happening as fast as he would've liked. Months had passed since a close, split decision loss to Gray Maynard completed his UFC contract obligations, and even though he knew something would happen soon, the end result couldn't come fast enough.

Knowing that a fight was possible in the near future, he decided it would be a good time to travel from his home in Austin, Texas to Phuket. The trip was to be strictly business.

Many fighters travel to Thailand to train with the country's Muay Thai masters. The sport is a national pasttime there, with many beginning their fight careers around the beginning of their teenage years or even younger. If Bangkok's famous Lumpinee Boxing Stadium is the national proving ground for the art form, in recent years, Tiger Muay Thai in Phuket has become the training ground for it.

"I was there strictly focused on training," Huerta told MMA Fighting. "I wanted to get better. But what I ended up taking out of the trip was so much more than just the training aspects."

In his free time away from the camp, Huerta -- sometimes with UFC welterweight Mike Swick, who was also visiting -- spent time checking out his surroundings. In some places, what he saw was poverty that reminded him of some of his own days growing up. It hit home that while he was so anxious to get back in the cage, there were much bigger problems out there.

"It really brought some clarity to my mind, my soul and my thoughts," he said. "It's really hard to explain, but it was just an awesome trip, and it's like it was something that needed to take place to show me things I needed to see and learn."

At around the same time, Clark was working on finalizing a deal to bring Huerta to Bellator. For a time, Strikeforce was in the running, too, but Huerta liked the idea of being able to fight multiple times this year and controlling his own destiny in a tournament-style format.

On March 15, Bellator announced Huerta's signing and wasted no time making him the featured part of their company, putting him on the main event of the season's first event.

"It was nice the way those things happened together. I learned you can't try to force things in life," Huerta said. "Things get put in your path, and they happen the way they happen. This worked out great."

Huerta faces the unbeaten Chad Hinton on Thursday (the fight airs nationally on Fox Sports Net). He says he's already on weight, and was at 158 pounds on Monday, and because of that, that's another sometimes stressful factor that's been eliminated from his mind.

He says he's so confident in himself that he told his family to sit this trip out because of his belief he'll eventually find himself in the finals.

Due to the tournament format, fighters can't be faulted for playing it conservatively to make sure they retain their health over the long haul, but Huerta said that will never be an acceptable path for him. He's waited a long time to be free again, even if it necessitated him being caged.

"I know who I am, and it's not the fighter I am to be conservative," he said. "I'm going to go in at my high pace. I'm going to bring it to my opponent. If he can keep up, it will be a hell of a fight. And if he can't, it will end.

"I'm expecting to win the tournament," he continued. "I know that I need to take every fight one at a time, but at the end of the year I want that Bellator belt around my waist and to be considered one of the top three lightweights in the world. I have my goal, I have my opportunity, and I'm not going to stop until it happens."