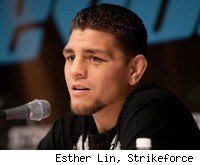 According to GracieFighter.com, Diaz was under consideration to face Dream welterweight champion Marius Zarmomskis in a rematch for the Dream title, but instead decided to match Diaz with a Japanese fighter to please Japanese fans.

An encounter between Diaz and Sakurai has been talked about for nearly two years, though interest in the fight is at its lowest now that Sakurai is coming off two straight losses. Diaz, at the time a fighter under contract with EliteXC, would have fought Sakurai for the then-vacant Dream welterweight title at Dream.5, but EliteXC needed Diaz for a featured fight on CBS taking place five days after the Dream.5 card.

Diaz defended his title at Strikeforce: Miami in January, beating Zaromskis in the first round with punches. Meanwhile, Sakurai has losses recently to Zaromskis by KO and Akihiro Gono by submission.

Dream has scheduled for Thursday at 1pm local time a press conference, where the Diaz-Sakurai fight, as well as further details on Dream.14 are expected to be announced.