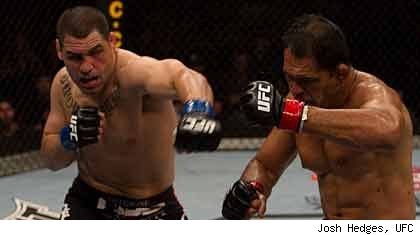 As it always does on nights when CBS has shown live mixed martial arts, the UFC will re-play a selection of fights on Spike TV on Saturday night, April 17. This time up it's UFC 110 that will go head-to-head with Strikeforce.

Spike announced Monday that it will show UFC 110 at 9PM Eastern and Pacific, the same time that CBS is showing the Strikeforce card headlined by Dan Henderson vs. Jake Shields.

The fights Spike is showing include Antonio Rodrigo Nogueira vs. Cain Velasquez, Wanderlei Silva vs. Michael Bisping, Joe Stevenson vs. George Sotiropoulos, Keith Jardine vs. Ryan Bader, Mirko Cro Cop vs. Anthony Perosh and Chris Lytle vs. Brian Foster. That's certainly not a bad bunch of fights for those who didn't buy the UFC 110 pay-per-view on Feb. 20, although if the UFC had really wanted to hurt Strikeforce it could have given Spike a replay of UFC 111 or even UFC 112.

In addition to Henderson vs Shields, the CBS card will also include Shinya Aoki vs. Gilbert Melendez and Gegard Mousasi vs. Muhammed "King Mo" Lawal.