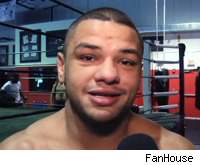 Less than a week after UFC welterweight Thiago Alves had brain surgery, he's been booked in a fight, as UFC President Dana White confirmed through his Twitter feed that Alves and Jon Fitch will be matched up at UFC 115 in Vancouver.

The two were scheduled to face off at UFC 111 in March when Alves was pulled from the card 48 hours before the show after New Jersey state athletic commission doctors found irregularities in a CAT scan.

To address the issue, Alves underwent surgery at New York City's Roosevelt Hospital to separate an artery from a vein in his brain, and was told by doctors he only needed to be sidelined from training for two to three weeks afterward.

Alves and Fitch are considered top five welterweights, and it is believed that the winner of the bout could jump to the front of the line for a rematch against current champion Georges St. Pierre, though both men have already lost to him in the recent past. An upcoming matchup between Paul Daley and Josh Koscheck will also factor into the title mix.

Alves and Fitch fought in June 2006, with Fitch winning via second-round TKO. After that, Alves (17-6) reeled off a seven-fight win streak, which ended when he lost a five-round decision to St. Pierre at UFC 100.