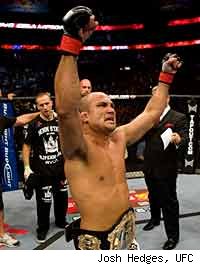 UFC 112 on Saturday will be a rare opportunity to see two of the five best pound-for-pound fighters in mixed martial arts on the same card, but it will be more than just that. It will also be an opportunity for both UFC middleweight champion Anderson Silva and UFC lightweight champion B.J. Penn to make a case for being not just top five, but the best fighter in the world.

Right now, I consider Silva the sport's second-best fighter and Penn the fourth. But they Top 4 fighters are bunched together so tightly that with No. 1 Fedor Emelianenko dragging his feet in scheduling his next fight, a spectacular performance from Silva or Penn could convince me to make a change at the top.

My rankings of the top 10 pound-for-pound fighters heading into UFC 112 are below.

(The fighter's previous rankings are in parentheses).

1. Fedor Emelianenko (1): With his 31-1 record, and his current streak of finishing eight straight opponents in the first or second round, Fedor is still the best in the world. But with only one fight in the last 14 months, and with nothing more scheduled, his grip on the top spot isn't as tight as it used to be.

2. Anderson Silva (2): What could Silva do to leapfrog Fedor? He'd have to absolutely dominate Demian Maia on Saturday, and he'd have to hold his own with Maia on the ground. We already know that Silva is far better than Maia in the stand-up game, so knocking out Maia quickly, the way Nate Marquardt did wouldn't really change our perceptions of him. But Maia is one of the best Brazilian jiu jitsu players in the world. If Silva can handle Maia on the ground, he'd be making a strong statement that he's a better all-around fighter than Fedor.

3. Georges St-Pierre (3): Yes, he thoroughly dominated Dan Hardy at UFC 111. But I'm going to have a hard time calling him the best pound-for-pound fighter in the world if he doesn't become more of a finisher. In 16 UFC fights, he's been stopped in the first round as many times as he's stopped his opponents in the first round.

4. B.J. Penn (4): Could Penn jump all the way up from No. 4 to No. 1 on Saturday? I believe he could, if he absolutely smashes Frank Edgar and finishes the fight in the first round.

5. Lyoto Machida (5): The undefeated Machida isn't too far from the top of the pound-for-pound list, either, although to get to the top he'd need to look a lot better in his rematch against Shogun Rua than he did in their first fight.

7. Dominick Cruz (NR): The WEC bantamweight champion hasn't lost since moving down to 135 pounds, and his only loss at any weight came against Faber in a featherweight title fight three years ago.

8. Shogun Rua (8): He fought essentially even with Machida for 25 minutes in October. Their rematch is only a month away.

9. Rashad Evans (9): I always hear from readers who think Evans has no business on a Top 10 pound-for-pound list. I think people are going to be surprised by just how good he looks against Rampage Jackson in May.

10. Joseph Benavidez (10): Even in the WEC's smallest weight class, 135 pounds, he's fighting bigger opponents. And no one except Cruz has been able to beat him.