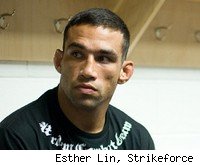 Strikeforce is eyeing a June 16 date for an upcoming live event, a source with knowledge of the situation told MMA Fighting.

Though the date is not yet confirmed, according to the source, it appears that the company has it targeted. A site has yet to be chosen, though the San Jose, Calif., based promotion is leaning towards a show in the Los Angeles area to coincide with the massive E3 entertainment expo.

The company has been tentatively planning a June date to feature the return of heavyweight superstar Fedor Emelianenko, but it appears unlikely that the June 16 show will include him. The date falls on a Wednesday and seems more likely to be a Challengers Series card. Since teaming up with Showtime and CBS, all of the company's major shows have taken place on Saturdays.

The organization has ramped up its show production in recent months, holding seven shows from Nov. 2009 to March 2010.

Strikeforce: Nashville is set for April 17, with three championships in the line, including the debut of former UFC star Dan Henderson, taking on middleweight champ Jake Shields.

Another major show is locked in to a May 15 date. That event, taking place in St. Louis, features a main event of heavyweight champ Alistair Overeem defending his belt for the first time, against Brett Rogers.