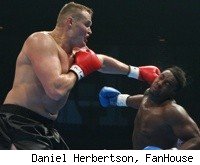 K-1 super heavyweight champion Semmy Schilt defended his title with a victory over Errol Zimmerman at the K-1 World Grand Prix 2010 in Yokohama on Saturday.

At the start of the first round Zimmerman actually surprised Schilt by lunging forward with a big straight left hand to the nose, snapping Schilt's head back. But once Schilt recovered, he dominated the round, backing Zimmerman up against the ropes and nearly knocking him down. Two of the three judges scored the first round 10-9 for Schilt, while the third judge scored it a 10-10 draw.

In the second Schilt completely controlled the fight, and Zimmerman at one point appeared to be almost out, although he recovered nicely. Schilt kept a more deliberate, methodical pace in the second and won 10-9 on all three judges' cards.

By the third Schilt slowed down considerably and seemed happy to simply win a decision -- which has been a common criticism of Schilt throughout his K-1 career. The third round was scored a draw by all three judges, giving Schilt the unanimous decision win.

It was far from the most impressive performance we've ever seen from Schilt, but it was yet another win from a kickboxer who has now won six in a row.
http://xml.channel.aol.com/xmlpublisher/fetch.v2.xml?option=expand_relative_urls&dataUrlNodes=uiConfig,feedConfig,localizationConfig,entry&id=864495&pid=864494&uts=1270315811
http://www.aolcdn.com/ke/media_gallery/v1/ke_media_gallery_wrapper.swf
2010 K-1 World Grand Prix Photos
Kyotaro is overwhelmed with emotion after winning the K-1 heavyweight title at the K-1 World Grand Prix 2010 in Yokohama on April 3, 2010.
Daniel Herbertson, FanHouse
Daniel Herbertson, FanHouse