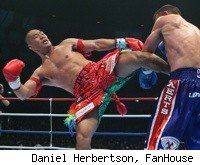 The K-1 heavyweight title has largely been a belt that didn't mean anything since Keijiro Maeda, the Japanese fighter better known as Kyotaro, won it a year ago. But it means a lot now that Kyotaro beat Peter Aerts at the K-1 World Grand Prix 2010 in Yokohama.

It was the biggest win over Kyotaro's career, and a tremendous display of technical and powerful kickboxing in beating Aerts, a legend who's clearly past his prime.

Kyotaro knocked Aerts down in the first round and had him badly hurt, and Aerts went down again at the end of the first but was saved by the bell. When the second round started Aerts was clearly not all there, and Kyotaro finished the fight quickly: A right cross sent Aerts dropping face-first into the canvas, and the referee didn't even bother to count because it was clear that Aerts was out.

Now that Kyotaro has defended his heavyweight title in spectacular fashion against a K-1 legend, it's important for K-1 to capitalize on the momentum he has just earned by putting him back in the ring soon. The heavyweight title is a belt that should mean something in K-1. Maybe now it will.