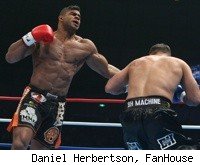 Alistair Overeem looked like a wrecking machine in the K-1 ring once again on Saturday, knocking out Dzevad Poturak in the first round at the K-1 World Grand Prix 2010 in Yokohama.

The knockout blow was a right knee to the jaw, but it was preceded by some good technical boxing on Overeem's part. The much smaller Poturak landed a few punches that didn't do any damage, while Overeem landed powerful punches throughout the first round, including a right hook that knocked Poturak down.

Overeem keeps a frenetic pace, and this was his sixth kickboxing match in the last 15 months -- a period during which he also found time for three MMA fights. Now he's set to return to mixed martial arts and defend his Strikeforce heavyweight title against Brett Rogers on May 15. Overeem said after beating Poturak that he suffered no injuries, so he should be good to go in six weeks.

"You can expect me to start training again on Monday," Overeem said afterward. "Obviously my next opponent is different. He's a lot bigger, and it's MMA, so I'm going to have to change some techniques, but I feel very strong and nobody can beat me now."

It's worth noting that while the muscular Overeem has mostly been defeating smaller men over the last couple of years, he was listed at 242 pounds for this fight and appears to have lost a little weight since 2009, when he typically weighed in at more than 250 pounds. He'll be the smaller man in the cage against Rogers, and that's something he's unaccustomed to.

What Overeem has grown accustomed to is bullying everyone who steps into the ring with him. That's certainly what he did to Poturak.